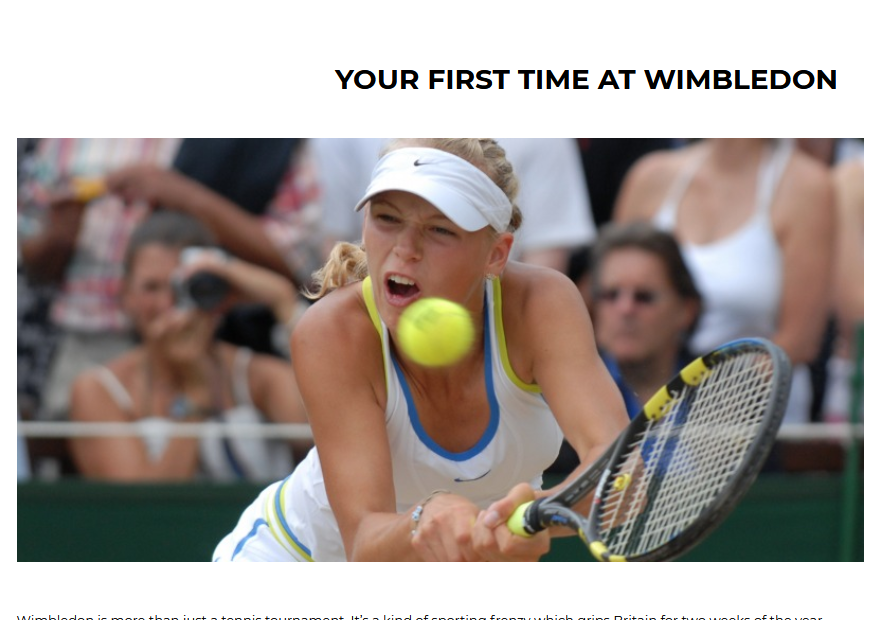 Erm…it’s held in Wimbledon, actually. It’s that des-res pocket of south-west London where they’ve been holding the competition since 1877 – making it the oldest tennis tournament in the world.

It started out as a tiny amateur event for the slightly posh members of the All England Lawn Tennis and Croquet Club but has mutated over the years into today’s Grand Slam tournament, and the only one played on grass.

WHAT’S SO GOOD ABOUT IT?

The whole tournament is delightfully batty and out-of-step with today’s brash world of professional sport. It’s the fact that it’s still played on the traditional playing surface; it’s the hearty applause whenever the rain covers are pulled over the courts (before they had the sliding roof installed over Centre Court). Most of all it’s multi-millionaire athletes being given a stern ticking off for breaching Wimbledon’s all-white clothing code, and not bowing or curtseying to the Royal Box.

ISN’T IT IMPOSSIBLE TO GET TICKETS?

No, it’s one of the few major sporting events in the world where you can still turn up on the day and buy a ticket. Although, bagging a centre court ticket requires lots of luck and a willingness to stand in a queue next to people with mad stares and Union Jack jester hats.

The queue starts forming in the early hours, with around 500 seats being made available for each of the main courts. They cost around £50. But general ground tickets on the day shouldn’t be a problem.

If you’re not into queuing, then you’ll need to have entered a public ballot. The closing date is the December before each tournament with tickets randomly allocated by a computer.

WHICH IS THE BEST COURT?

It depends on what you’re after. If you want pomp, prestige and the chance to spot a royal stifling a yawn, then go for the Centre Court. If you’re after a thrilling match and the chance of watching an upset then Court Three has a fearsome reputation as the Graveyard of Champions.

It’s still optional. But more than 61,000 pounds of them will be guzzled during the fortnight. It’s a tradition that started back in 1953 when they first allowed a strawberry vendor onto the site. And then sometime in the early 70s, they started dunking them in cream. Bit odd really – but nice.

WHO SHOULD I BE CHEERING FOR?

This is down to personal preference but a rough guide would be: anyone British, anyone considered an underdog, any former champions and generally anyone who’s a bit rubbish.

Look disapprovingly at anyone you hear utter either of these terms. The correct name for the grassy bank next to No 1 Court is Aorangi Terrace. It’s a Maori name, as it used to be the site of London New Zealand Rugby Club’s ground.

This is where you can watch the big screen and soak in all the atmosphere/rain without the cost of a main court ticket. The only downside is that there’s a constant risk of being accosted by a BBC reporter type and asked to say something banal.

DO SAY: ‘The game of lawn tennis was actually invented in Birmingham in 1865 by Harry Gem and Juan Bautista Augurio Perera.’

DON’T SAY: ‘Wahey! I can see her pants from here.’