Britain loves…saying thanks to bus drivers 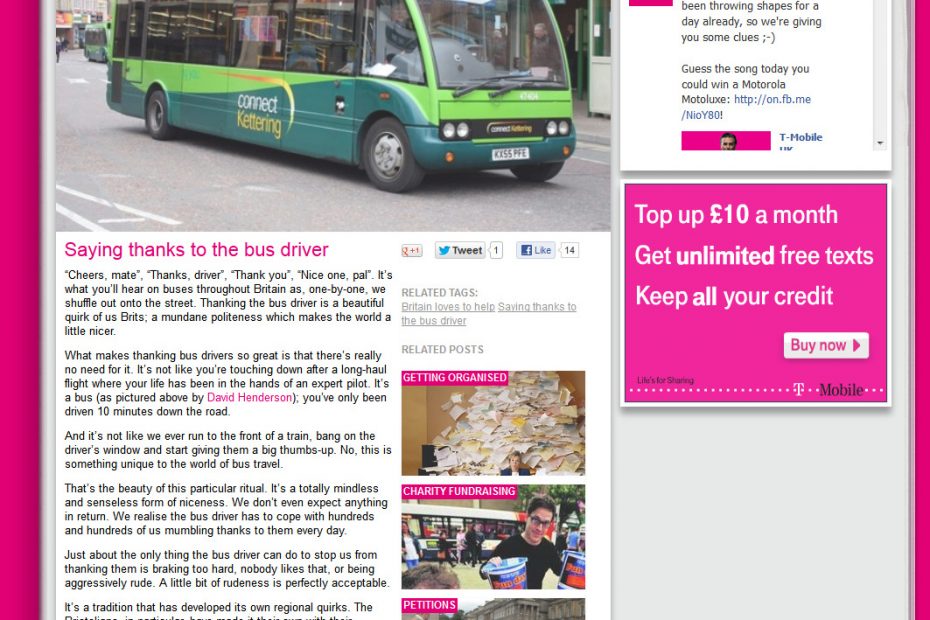 What Britain Likes…Saying Thanks to Bus Drivers

It’s what you’ll hear on buses throughout Britain as, one-by-one, we shuffle out onto the street. Thanking the bus driver is a beautiful quirk of us Brits; a mundane politeness which makes the world a little nicer.

What makes thanking bus drivers so great is that there’s really no need for it. It’s not like you’re touching down after a long-haul flight where your life has been in the hands of an expert pilot. It’s a bus; you’ve only been driven 10 minutes down the road.

And it’s not like we ever run to the front of a train, bang on the driver’s window and start giving them a big thumbs-up. No, this is something unique to the world of bus travel.

That’s the beauty of this particular ritual. It’s a totally mindless and senseless form of niceness. We don’t even expect anything in return. We realise the bus driver has to cope with hundreds and hundreds of us mumbling thanks to them every day.

Just about the only thing the bus driver can do to stop us from thanking them is braking too hard; nobody likes that, or being aggressively rude. A little bit of rudeness is perfectly acceptable.

It’s a tradition which has developed its own regional quirks. The Bristolians, in particular, have made it their own with their use of the phrase “Cheers, drive”. Dropping the ‘r’ from driver has become a major source of local pride with museum exhibitions named after the phrase and t-shirts emblazoned with it on.

One of the few places in Britain where the bus driver thanking tradition has fallen out of common usage is London. They try to make excuses; they say it’s the design of London buses with the exit in the middle. Yes, it could be that. It’s possible. Or it could just be that they’re misery guts.